Did you know that girls can change their opinion about a guy and his ‘potential’ even if he’s terribly ugly? Even if he’s not very socially adept? Even if he dresses ridiculously?

Not only CAN they change their minds. They do.

As girls we LOVE compliments. We LOVE attention. We LOVE flattery. We LOVE having power.  Especially power over men.

Really, you say? Not you, right?

You may think you are the quiet, submissive type. And you may be. But there is something inside you that loves being able to “woo” a man with your looks, your words, your flirting. Even if you don’t want to admit it… you love the feeling when you know you’ve got a guy’s attention and you can manipulate him by playing hard-to-get or giving him signals that may lead him to think about you “that” way.

I know this is true because countless women through the ages have been the same. You are not the first. Eve was. It’s part of her curse that she so generously shared with all of us. Her desire would be for her man.

And until you have your own man it may feel like a lot of fun to woo a few, right?

So when a guy – perhaps the unattractive nerd in the group – comes over to you and tells you how much he appreciated what you had to say that night and engages you in a conversation, your brain does what every girl’s brain does. It begins to calculate – Does he like me? Perhaps if I look shy he’ll become more bold. Or maybe if I laugh and show him I can have fun he’ll think I’m a pretty good catch.

And some girls continue on and say to themselves – Watch him fall when he finds out there’s NO way I’d go out with him! 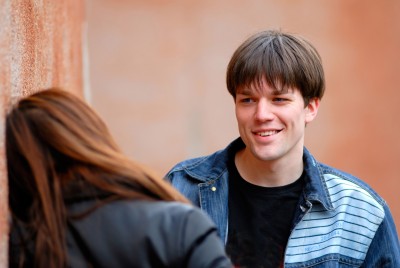 That’s mean. But women do it all the time. Why? Because they love the thrill of the chase (will he come after ME?) and the power of making a guy fall for her.

But don’t think guys are without their own tricks! Many guys know that even if they are not exactly Mr. Macho Muscles ‘n All, they can melt your heart and change the way you think about them. All they have to do is be sweet.

With just a few quiet, for-yours-ears-only, whispered words complimenting you, or saying something nice, he will have caught your attention. If he spends an extra 10 minutes just talking with you – just you – listening to you and looking into your eyes when you talk – he’ll have you changing your mind, as you start to admire his amazing character! If he is gallant, and gentlemanly, and treats you like a queen he knows that he will be in the running to be your guy. He won’t be out in left field anymore. Because he has wooed your heart.

This is something girls often don’t realize. Simple conversations can be full of powerful interactions, powerful enough to confuse and muddle up a good friendship or potential partner.

Girls – when guys talk to you, they are (often) trying to “win” your affections. They will begin to melt your heart. But at the same time you may well be checking out your ability to make him want you. The way you move your body, or your eyes, or even touch his arm spellbinds him – and you know it.

By the time this conversation is done – even though it was likely less than five minutes (but it felt like an hour) – you have both played with each other’s emotions, lusts, and hearts. Chances are you will both leave wondering what really happened and if in fact a relationship is possible. Even if you wouldn’t have ever considered him before that.

It’s easy for girls to fall for a smooth talking gentleman. And many girls will gladly make a guy fall for her – even if it’s just so she can see him fall.