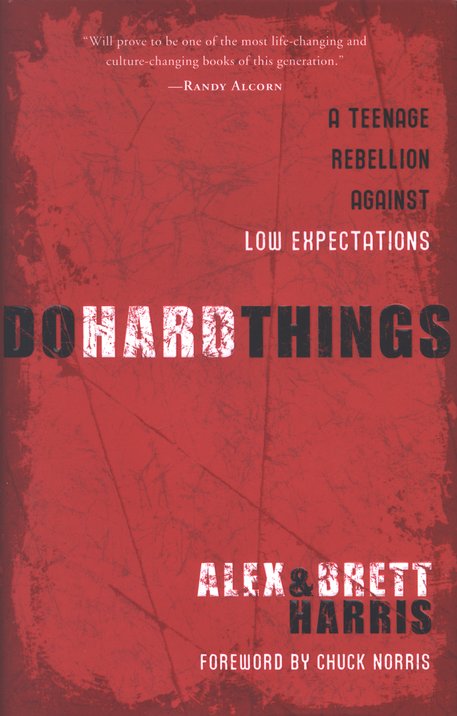 I highly recommend the book to everyone. To parents, teachers, teens, grandparents, neighbors, employers… everyone.

Let me tell you why.

Second, they hit the nail on the head! Their theme is that teens can do exceptional things, do them with excellence, and they don’t have to wait until they are “old enough”. They’ll have to work hard at it, but every time they work hard at something they are exercising their skills, gifts and talents to be used for mighty things.

Third, I appreciate the movement they’ve started called the Rebelution. They have a purpose and a plan for rebelling against a culture that tells them they are just teens and teens can’t do anything well. They are also rebelling against the notion that teens can’t and shouldn’t do anything important. I appreciate that type of movement – a group of teens who are not simply trying to make a point, but who by their actions give the adults in this world a run for their money when it comes to excellence and large-sized endeavors – especially when it benefits others as in the case of ending human trafficking, or feeding the hungry.

My overall favorite story or object lesson from the book is the story of the Vikings. For many, many years people around the world were afraid of the Vikings. They were brutally strong and could kill someone with a blow. Even well-trained war-ship captains were afraid to run into them because it meant losing. In those days war ships were filled not only with soldiers but also with men who would row the boat. Those men would do all the hard work so the soldiers would be rested and ready for battle. However, the Vikings rowed their own ships. And that made all the difference. The small, tedious, boring, hard task of rowing the ship built muscle and character in the Vikings that was unmatched in any other company. So they won – hands down.

I wonder… what kinds of little, hard things are you avoiding, procrastinating, or not doing a good job at just because they are hard? What difference do you think it might make in your life if you worked really hard at them – cheerfully? In what area of your life could you be a “Viking”?

Teens… I would love to hear from you!

YOU are who this book is about! I’d like to know what you think… is it true that you can truly accomplish a lot? That we as adults just need to let you at it?