Leave a comment December 20, 2011 in Marriage and Married Single Moms

Husbands and wives need to talk. About almost everything. At least we should.

If something is bugging me I like to talk it out. Now. My husband on the other hand prefers to have time… time to let tempers cool down, time to think, time to figure out how best to handle it.

Having a job that took him away from home seemed great in some ways. We had less to disagree about because we weren’t around each other as much. On top of that, I didn’t want to bother him with what was bugging me if he was only going to be home for a short time. So we didn’t have very many uncomfortable conversations.

But over time that leads to trouble.

When little stuff comes up and we deal with it right away, it’s usually an easy fix. Nobody gets themselves in a huff that can’t be ended in a few minutes. Over.

But when that little stuff has to wait a long time it grows. Since the issue first came up I’ve had time to think.. and stew. I’ve imagined all the sinister reasons he refuses to hang up his towel, or fix the muffler. It becomes a capital offense that he didn’t like the meatloaf the last time I made it.

So he gets home and it would seem reasonable and wise to talk these things out before they get out of hand. 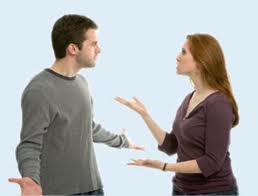 But if your husband is away a lot you will understand that the last thing you want to do when he’s only home for a brief period is spend any of that arguing or dealing with tough stuff. You want him to have a good experience at home. We’re cautioned by marriage experts all over the world to make home a refuge. Greeting him at the door with last month’s issue loaded in your gun doesn’t seem to line up with that.

So you leave it. You smile and leave him alone as he romps with the kids or sleeps off his jet-lag. Hoping for an intimate night since he’ll be gone again in a day or two, you decide to leave all that emotional stuff under the rug so you can fully experience your love together.

Then he leaves. And there’s another chunk of time before you’ll be free to talk about the little issue. But it’s not just that, now is it? Because this time he said something about spending too much money on clothes…

And the story goes and grows.

Then one day the issues you could have dealt with quickly and easily have become mountains. A conversation over dinner isn’t going to solve this. It’s grown not just in the number of issues, but in the negative thinking that has accumulated around them.

Dealing with difficulties in a marriage with distance is a catch 22. If you deal with them whenever he’s around you’ll likely sabotage the happy moments you could have with him while he’s home. If you don’t, you’ll be growing the mole hill into a mountain.

What do you think?

How do you deal with difficulties and distance?