I love Christmas carols. Really I do. But I wonder sometimes what Mary would say if she heard them. 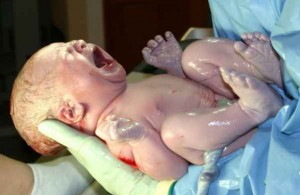 Real babies cry when they are born. I'm sure Baby Jesus did too. It probably wasn't a very silent night.

Silent Night? Have you ever given birth? How silent was that? Then there are apparently radiant beams from His holy face. I’ve given birth four times. I’ve seen plenty of newborns. Sure, none of them were God incarnate… but they were blotchy, red faced, and swollen. None were radiant.

We teach our kids as toddlers to sing Away in a Manger. No crying he makes? Even after the cows wake him with their mooing? Really? Why are we so afraid of the human side of Jesus? He’s fully God, yes. But also fully human. Human babies cry… especially when they are first born, and especially when cows wake them up!

We seem to have no idea when Jesus was born either if you consider our songs. Perhaps it was at midnight? (It Came Upon A Midnight Clear.) But then again, perhaps it was morning? (O Come All Ye Faithful.)

Those shepherds, too. It must have been quite a night, no doubt. I’d be a little traumatized if glowing heavenly beings appeared and started talking to me! Yet we can’t seem to get it straight in our carols. It may have been a cold winter’s night that was so deep (The First Noel). Then again it can’t have been that cold because they were just sitting on the ground. (While Shepherds Watched Their Flocks.) But apparently the weather was bad – they left their flocks a-feeding in tempest, storm and wind. (God Rest Ye Merry Gentlemen.) Do we really need to add a blizzard to the event in order to understand why the shepherds were shaken up?

No!! It shook up the whole world just to THINK that the God of the universe had given up heaven to take on a human baby body. Human. It’s not the God part that’s most amazing… it’s the human part.

I think one of the hardest things for me to grasp is the full humanness of Jesus. We’ve made Him into a “good baby”. We’ve decorated the manger with tinsel and holly berries. The shepherds must have seen a glowing child, all smiley and happy right? (He was a newborn. If he was smiling it was probably gas. If he was glowing it was probably jaundice. Trust me. I know.)

The trouble with a not-so-human baby means we continue having trouble when He grows up. We think he doesn’t know what it’s like to be tempted. He has no idea, we believe, how hard it is to keep from swearing when you hit your thumb with the hammer. He probably never struggled with anything. He was pleasantly perfect. 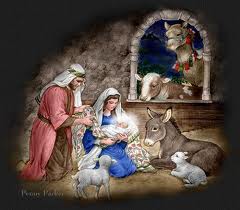 You can sing about this fake baby Jesus… but make sure you worship the Real Jesus.

But it’s not true. Life was hard for Jesus. He was bullied. Are your kids bullied? Not fun, right? Do you think maybe He went home to Mama and cried because they called Him names again? Likely. And He died. For real. He was cut. Bruised. Beaten. Sliced. Whipped. Kicked. He cried. Real tears.

And it wasn’t a silent night then either. Nor was it a clear midnight. Neither did angels come down with golden harps to serenade the gruesome event.

Go ahead. Sing carols this Christmas. Do it. But don’t worship the golden-haired fake Jesus that lives in the clean manger of those songs. This Christmas remember the Real Jesus.