I did a crazy fast trip to Toronto from Wednesday to Thursday. Flew in, flew out.

Well… there was a little more in between.

I arrived and spent the afternoon with one friend, then another friend. We hung out, caught up on our lives and then got all fancied up for…

My book, Married Mom, Solo Parent, was up for an award in THREE categories. The categories were: Culture, Relationships, and Inspirational / Devotional.

So I put on my sparkly purple top, a little eye-shadow and some jewelry, and off we went. Oh and I carried a silver sparkly clutch.

I’d show you a picture, but both my friend and I didn’t think to take pictures!

Yes we both had our cameras. We even talked about taking pictures. But once we got there – we forgot! I’m so bad when it comes to remembering to take photos!!

The program was kind of fun with little readings here and there. The MC was Grace Fox – an author, speaker, and friend of mine.

But you don’t really care about that part, do you? I know… you just want to know… WHAT DID YOU WIN????

Well… I didn’t win first place in any category.

But I DID win two Awards of Merit – which means Married Mom, Solo Parent came in second place for both the Culture and Relationships categories! 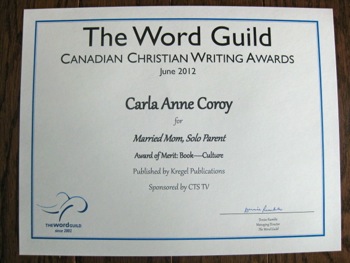 Isn’t that fun!?!? You can see them in the photos.

Married Mom, Solo Parent is also in the running for ForeWord’s Book of the Year awards, which will be announced in the US later this summer!

Any credit this book gets should really go to God. 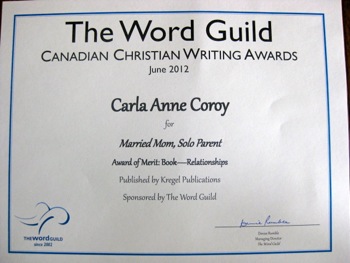 I wouldn’t have even considered writing it without His prompting.

I wouldn’t have taken the time to write it without His stopping me in my tracks to allow it to happen.

I wouldn’t have had words to say (it was after my stroke) if He hadn’t given them to me.

I would have never found an agent if He hadn’t set me up.

I would have never found a publisher if He hadn’t hand-picked Kregel for me.

So really… these Awards should have His name on them. I am humbled that He shares the honor with me.

Judging notes – what do you think?

An interesting aspect of these awards is… you get to see the judges’ notes.

Very interesting! Some of my marks were VERY low and others were VERY high.