Do you know what’s in your child’s Sex Ed curriculum?

Recently a school that uses a Planned Parenthood sex education curriculum got into hot water with the parents of their fifth grade students. During their “routine” sex ed class the teacher (who is also the principal of the school) taught the kids how to have oral sex.

Parents were outraged, accusing the teacher of raping the minds of their 10 and 11 year old kids.

But the school superintendent defended the principal saying “she stuck to the curriculum”.

(You can read the whole story here.)

A breach of trust

The parents in this small town trusted their small, country school to take care of their kids. They assumed their kids would be safe at school.

In the school’s defense, they had given parents an opportunity to review the curriculum. Only three parents showed up. 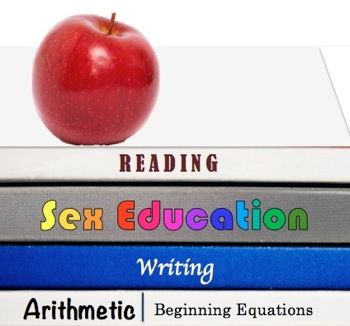 I don’t think this is unusual.

But our teachers are wonderful!

Many parents love their kids’ teachers. They see wonderful teachers and think their kids must be safe.

But the curriculum is not chosen by those teachers. It’s the school board who chooses that curriculum.

And in most cases it’s Planned Parenthood who writes that curriculum.

Planned Parenthood’s priority is not life or health for your kids. They have money as their focus and they leave ruined lives in their wake.

They also teach that sexual orientation is whatever you want it to be. Planned Parenthood is godless and dangerous. And they have likely written the curriculum your children are being taught from.

Do you know what’s in your child’s sex ed curriculum? I encourage you to check it out.

I went to the Manitoba Government website to find out what’s in the sex ed curriculum for public schools here in Manitoba. It didn’t take much time.

I was very discouraged by what I found.

I talk to moms all the time. When I ask if they have talked to their kids about sex when their kids are 10, 11 or even 12, they tell me no.

They are so sure their kids will come to them when they are ready. They think the kids aren’t interested. They think their little children are too innocent for all that info. They want to keep them young, just a little longer.

But what they don’t realize is that they are often already far too late. They are receiving the info at school. From teachers. From class discussion with other kids their age. And further discussions on the playground.

If you don’t talk to your kids about sex and what God says about it from a VERY young age someone else WILL get to it first.

And even if your kids are NOT ready you still need to talk to them. Because their school teachers will not be waiting to teach those lessons until they are “ready”. They teach them when the curriculum says to teach them. So you better be teaching at home as well.

And I’m not just talking about periods and body hair. Kids in school are being taught about sex, ejaculations, wet dreams, intercourse, homosexuality, oral sex, and all kinds of additional stuff… and most of this is taught long before grade five!

Take a look at what I uncovered in a simple 15 minute search through the Manitoba Government website.

Kindergarten students are taught to name and identify all body parts, including private parts.

Good: I think it’s important for kids to know what their body parts are called.

Bad: I don’t think it’s the teacher or school’s job to teach them about their private parts. Talking about private parts in a school setting, with 30+ other kids and an adult other than their parents, teaches the kids that there’s really nothing all that private about it after all. Granted… after they’ve learned all about these body parts in that setting, they are then told not to talk about it because it’s private and you need to respect private parts. I’m not kidding. And that makes sense how?

Grade 2 students are taught about how eggs and sperm work. They are taught about sexuality and that everyone has a different kind of sexuality (“we’re all special and unique”). Homosexuality is taught as normal. Teachers are encouraged to use a book called ‘Heather Has Two Mommies’.

Good: I think it’s important for kids to know that eggs and sperm make babies. But in grade 2?? I also don’t mind them learning that there is male sexuality and female sexuality.

Bad: None of this is age-appropriate in my opinion. I’ve been mentoring kids now for many years and one thing I know… at this age they are mostly not interested in that level of detail – EXCEPT for things that seem ‘odd’ to them. So they will grab hold of ideas like ‘two mommies’ or ‘two daddies’. A few of these kids may be ready to hear about how babies are made, but most only want brief, non-specific answers. AND I think at this point it is a parent’s job to be giving this information, not the teacher.

As for teaching about sexuality – I think this is way too young. The only thing kids this age are ready to handle is a recognition of differences between genders – boys like to play rough games, and girls like to play more gentle games, etc. But to open up the conversation on things like homosexuality as an option for kids who are still years away from puberty is ridiculous. Male sexuality and female sexuality and their differences won’t be obvious to the kids, even upon inspection, until they begin to reach puberty themselves. This information is pure propaganda regarding homosexuality and has nothing to do with teaching children age-appropriate health-focused principles.

Grade 5 students are learning all about reproductive organs and sexual intercourse. They are also learning how to use sanitary products, what happens when and how do you get an erection, what happens in ejaculation and how does sexual attraction work… and that’s just a small part of the whole package. They are also taught that gender roles are wrong and that there really are no ‘boy’ or ‘girl’ toys or activities. They are taught that we’re all the same except for how our environment has molded us.

Good: At this stage most kids should know about the reproductive organs, at least about the function that each has.

Bad: The reproductive organs the kids need to know about at this point should have already been taught at home and the info given in a public setting should be focused on strictly how that organ works – the science of it. No student should have to hear a teacher explain sexual intercourse in a public school setting. It’s wrong.

I have four kids. I’ve given all of them – and some of their friends – info on sexual intercourse and everything related to it. It’s private. It can be embarrassing. They don’t even want a sibling on the same floor of the house lest they hear what we are talking about. Not because they don’t want to talk about it – they DO! No, it’s because they understand that this is private and they don’t want the beauty of it ruined by some rude or disrespectful comment.

I’ve looked through the curriculum and there is NO mention of morality in connection with sexual intercourse. Some of the material is written and provided by Planned Parenthood (don’t get me started on that!) and some of it also teaches about sexual orientation.

I recently learned that in grade 5, during the sexual intercourse instruction, if a student asks about homosexual sex the teacher is obligated to provide that information to the classroom because there is to be no differentiation between those with differing sexual orientations. So… do you want your kids learning all about homosexual sex in grade 5 from a school teacher? I don’t.

But you know what I think is hypocritical? This whole idea that talking about sex and sexual anything is private! So after having your teacher talk about sex and penises, and vaginas, and erections and emissions, and ejaculations and homosexual intercourse… the teacher is supposed to teach the kids to “keep personal matters private”. Really?!?! Let’s talk about all the private stuff we can at school and then fill your brain with the fact that this is private so you can’t talk about it.

Obviously it’s fine to talk about all this at school – so where exactly should they not be talking about it? At home. Yep. It should come as no surprise that kids are NOT talking to their parents about it. Because after telling them far too much information at school the teachers are telling them to keep it quiet.

Beyond Grade Five the same things continue to be taught but in even greater depth. This includes how to care for yourself during pregnancy, what to do when you find out you have an STI or HIV/AIDS, how to let people know you have a different sexual orientation than they do, how your family affects our values and choices, etc.

It is a very, very disturbing book. The book had been approved for Manitoba curriculum use. But from what I have been able to research, it got a lot of negative publicity and so the government has made it very difficult to find out exactly how it is currently being offered.

But I do know this: It is still available. Even in very conservative towns (like Winkler, Manitoba) the book is available for free to students if they just ask for it.

But you have to understand, the reason it is not being handed out in the open as originally planned is not because the content is not being taught. It’s just because they feel parents wouldn’t approve of it being offered in that format. According to one person who was interviewed, “There is nothing in that book that is not already taught in the classroom.”

Do you know what your kids are being taught in sex ed classes? Are you aware of how their marks for other subjects are dependent on their sex ed class? (Especially their English Language Arts mark.)

What would you do if your child came home from school as a 10 year old having been taught about oral sex at school that day?

As a parent, are you willing to talk about this stuff with your kids? And if not, who are you entrusting it to?