When I was growing up we fried our bacon.

The strips went into the pan, and the pan was turned on. Not too high though… or else the bacon grease could catch on fire!

The bacon pieces would shrivel and curl up. And because they’d curl, some parts would be too dark and some would be a little raw for my taste.

And the stove top would get so splattered full of grease! I hated cleaning it up! For that reason I never liked making bacon.

But there’s a better way to cook bacon!

The bacon slices can be touching or slightly overlapping. I aim to get one 1lb package on each baking sheet. I use stoneware.

I know this may seem like old news to some of you, but just this week I talked with someone who had never heard of baking bacon…

So, to save some of you some hassle and grief, here’s the easy way to do bacon! 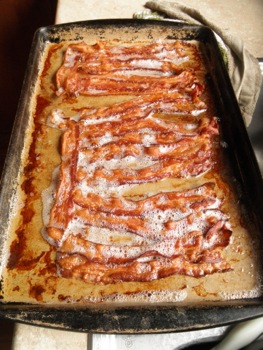 The bacon pieces lay flat and are evenly cooked on all sides.

Baking your bacon will keep the pieces lying flat, and they will cook more evenly. You’ll greatly simplify your clean-up, and you can cook lots at a time! I can fit two baking pans in my oven at once (well, I could do three but I only have the two pans).

I like to do several packages of bacon at once. Then I cool it, divide it up and freeze it for when I want to make quick bacon and tomato sandwiches, or add it to a quick egg breakfast, or even to make an omelette or other dish that requires bacon.