I’ve entered a new stage of parenting this year. I recently wrote on my Facebook status: Sitting on pins and needles while my son is in his first interview!! ACK!!!! The parenting manual didn’t have this chapter!!

The truth is, the manual didn’t have ANY chapters!! The manual never existed.

Learning to Parent from the Side

Then came the harder stages: Child is back-talking, firmly discipline to teach respect. Child is being bullied, talk to chaperone/teacher and train child to respond. Child is making poor friends, spend time talking and also exposing them to better friend options.

Now I’m in another new stage. The Parenting-from-the-Side Stage.

I’m not carrying them along. I no longer walk ahead to show the path. I don’t walk beside holding hands.

This is the stage where I get off the track my kids are on, and I run alongside the track, cheering, and praying. This is where I learn to offer counsel – at least sometimes – only when asked, not necessarily whenever I think it’s needed!!

I remember when my son had his baptism interview. Because he was young I was allowed to be with him. He did well! He slipped up near the beginning because he was nervous, but what’s a slip up when you are telling your testimony? It was fine.

Then recently he had his first real job interview. Thankfully it was a phone interview (although he might have done better in person, honestly).

I sat on a kitchen chair while he walked around the living room doing the interview. I was so tense I decided to surf Facebook just for a distraction. I told myself I’d stay in the room in case he needed my help. He didn’t.

Several times through the interview I thought I was going to explode. And then I’d remember… ‘Oh yes, Carla Anne, you are allowed to breathe!’

Because I’d hold my breath. My body was tense. Yet there was nothing I could do to encourage, help, or guide. It felt like everything I’d taught was on display.

Just like it was the month before while he was at the University of Waterloo Shad Valley Program.

He sustained an injury there, and I couldn’t do anything about it.

And there were almost no Christians.

And he did great. 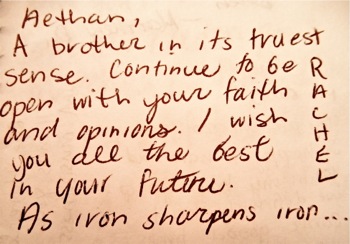 I read the back of his ‘month book’ (think year book, but for a month, not a year) where all his friends had signed their autographs and left him notes.

And I got to see my young man through the eyes of others: 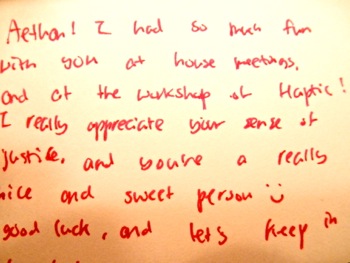 Sometimes when he told me about the movies the group had watched, or some of the things they had done, I’d quiz him further and he’d say, “I don’t know. I wasn’t there for that.” I became curious as to why he wasn’t participating, but he made it seem like I was not “with it” if I couldn’t figure it out.

“Duh! Because I went to bed. I need my sleep, so I’d go to bed while they were all doing that.”

My son put himself to bed? When he had the chance to stay up with friends? Without my being there to coach or advise him? Apparently he doesn’t need me for that, he does quite well on his own, thank you very much! 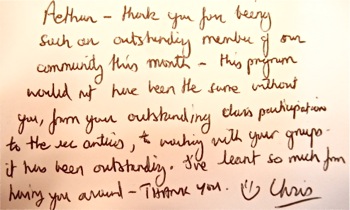 What I didn’t realize, when my kids were little, was that every part of parenting lasts forever.

As I ingrained in my children the same lessons over and over again – about treating others with respect, about not complaining when the going gets tough, about jumping in with both feet and doing what you need to do even if you don’t feel like it, about sharing your faith with those who don’t know God, about knowing God has a plan for you, about spending time with God everyday, especially when things are rough… all that coaching and parenting was not for then. It was for the future.

Think back to the kind of person you have become. I can pretty much guarantee it is partly because of things your parents instilled in you as a child. Even the negative stuff.

If I had realized

Perhaps if I had realized that the little fights between siblings I was breaking up were less about the little fights, and more about laying a groundwork for their adult lives, I might have handled things differently.

Today, and likely in the years to come, I’m getting my ‘grade’. Now is when I get to see how effective all the parenting I’ve done over the last 17 years really was. These are the years when I have to step back.

Now God must be their main parent. He will use me, I’m sure, to give some human touch to His guidance. But it’s my job to begin releasing them to be fully dependent on God.

Perhaps if I had realized 17 years ago that my main parenting job was NOT to raise great kids, or to raise smart kids or contributing citizens, I would have done things differently.

I would have helped them fall more in love with God. I would have given them even more opportunity to lean on Him alone instead of me.

Because parenting today is for tomorrow.

Our main role as parents it to prepare our kids to be children of God. Literally, children. To transfer their allegiance from their earthly parents to their heavenly parent. If that transfer comes off well, I’ll thank God. Because most of the time, I had no idea what I was doing.

The manual didn’t have those chapters!